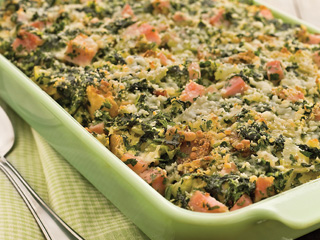 Cook bacon in a large heavy skillet over medium heat until crisp, 5 to 6 minutes. Remove bacon with a slotted spoon and drain on paper towel. Pour off all but 2 tablespoons drippings in Dutch oven and add fennel and leeks. Cook, stirring frequently, until soft, 8 to 10 minutes. Remove from heat; stir in bacon, ham, and parsley. Set aside.

Combine ricotta, salt, pepper, and 1 egg in a bowl; stir with a whisk until blended. Whisk in remaining 5 eggs. Stir in milk and spinach.